Having learned the basics of ANA Static and ANA Dynamics in the quickstart, we now turn our attention to a few other details and options you might find useful. As before, you can get all files used in this example here.

We have a Lipid Binding Protein (LBP) from a recent paper (PDB ID: 4XCP) bound to one of its natural ligands, palmitate (PLM). The main cavity of this LBP has some unusual behaviour, but we'll leave that for the Flexibility tutorial and just focus on tracking its volume along two 100 frames long trajectories. The two sets of 100 frames were collected from the same Molecular Dynamics simulation but belonging to two different conformers explored by the protein trajectory at different times, we'll refer to them as the High Volume (HV) and Low Volume (LV) trajectories since they are trajectories of different conformers.

Before tracking the cavities along the trajectories, let's see them on just 1 frame of each conformer. The cavity is already defined for us in the configuration file config_1.cfg, so we'll tell ANA to read from it and to write the output cavities in files named lv_cavity_1.pdb and hv_cavity_1.pdb for the low volume and high volume conformers:

Remember lv and hv stand for low volume and high volume, respectively. First, we got a warning from "chemfiles", that's the library we use to read and write biomolecular files as structures and trajectories, you can check more about it here.

So, as expected, the lv reports a smaller cavity than hv, let's see them on pymol:

We can clearly see that the cavity overlaps with the ligand, ANA's not taking it into account. This is ANA's default behaviour, to change it we have to use a new option.

Before adding this new option, let's check the contents of our original config file, config_1.cfg:

The first 2 lines should look familiar from the quickstart example. The only difference is that now we're using atoms to deliniate a cavity instead of residues. This is a bit more cumbersome than picking out residues, allows for greater detail when defining the cavity.

The next 2 options refer to the output cavity. grid_pdb tells ANA to write a PDB with atoms filling out the tetrahedrons that represent the cavity. raw_pdb is the alternative definition of the output_type option, in that case ANA will write a PDB representing the raw empty tetrahedrons. If the output_type option is set to grid_pdb, then the sphere_count may be set. It tells ANA how many atoms to use when filling each tetrahedron. The higher this number, the more dense the resulting tetrahedron will look like. If this value is too high, it will take ANA longer to draw the output cavity and the resulting PDB will be heavier and slower to load on a molecule visualizer. So 5 is a good value for this option and is also the default. None of the ouput types are very pretty, but grid_pdb gives a better idea of the cavity.

During volume calculation, ANA removes tetrahedrons with a volume lower than a 1.4A sphere since not all tetrahedrons represent actual voids. min_vol_radius allows you to change this parameter. It's a rarely used option since its default value (1.4) usually does just fine.

Now we can create a new configuration file (config_2.cfg) and add this line:

Now ANA won't ignore HETATM records and ligands will be included in the calculation. Let's run it and check the result:

Tracking our cavity along a MD run​

Now that we have 2 different ways of calculating our cavity and 2 different sets of 100 frames, let's run all 4 possible combinations and see what we get.

First, we track the cavity discarding the ligand (atom_only = true): 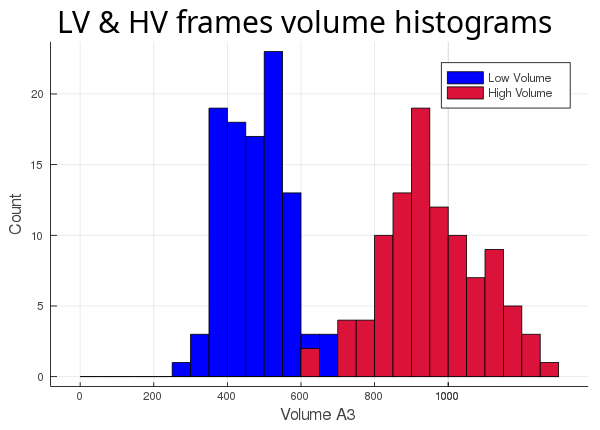 Then, we track the cavity taking the ligand into account (atom_only = false), and compare the volume differences for each trajectory: 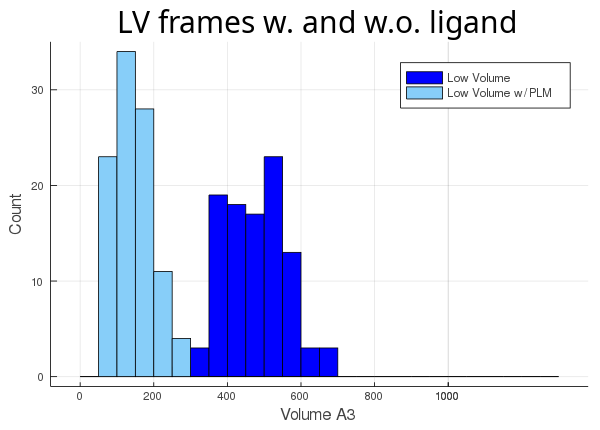 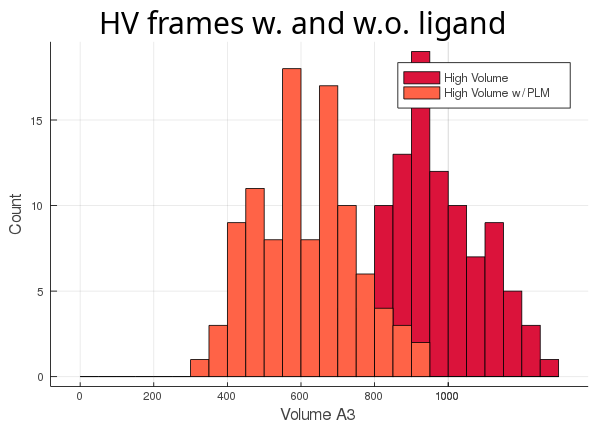 As you can see, the lv conformer leaves very little room left for the ligand (light blue histogram), while the hv's cavity seems oversized for its ligand (orange histogram). The atom_only option is set to true by default, since this usually is the desired behaviour. This option was created for the user's convenience so they wouldn't have to adapt their trajectory, if they didn't want to include all the molecules in the calculation.

The start, step and stop options​

These are dynamics specific options and were also created to avoid trajectory modifications. As their names indicate, they tell ANA which frames to read from an input trajectory, thus, avoiding unnecessary reading from unimportant frames. Unfortunately, this is only possible with Amber NetCDF trajectories, since this binary format is the only one that allows the necessary lazy evaluation. config_3.cfg defines these options:

These options tell ANA to start tracking the cavity at frame 5, to skip 10 frames at each step and to stop at frame 80. While ANA is fast, MD trajectories are becoming longer and longer and that's when these options become useful, especially the step option.

You can check the Jupyter notebook dynamics_tutorial.ipynb (in the dynamics folder linked above) to see all these results for yourself.