Along this tutorial we will be referring to PCA and NMA vectors as "vectors", "modes" and "collective coordinates", indistinctly.

ANA allows to quantify the flexibility of a cavity using a PDB structure and a set of collective coordinates (vectors) and their frequencies. These two may come from either an analysis of a Molecular Dynamics run ---Principal Component Analysis, or PCA---, or a Normal Mode Analysis (NMA) of a protein PDB structure, but the calculation itself doesn't change between them: ANA will displace the protein cavity along each vector and calculate its effect on the total volume, by summing up all the effects on the cavity ANA can quantify the overall flexibility of the cavity. As always, all the files are available online.

Based on Principal Component Analysis from a Molecular Dynamics trajectory​

Since ANA is able to read vectors and frequencies from the Amber PCA file format, we'll first check an example of this specific case.

We continue our previous work with the Lipid Binding Proteins from the Flexibility tutorial. by adding another b-sheet LBP and considering the apo and holo structures for each protein. We will be identifying each protein by their PDB ID: 4XCP and 4UET are the α-helix LBP with and without a ligand (palmitate), while 2IFB and 1IFB are the β-sheet LBP with and without the same palmitate ligand.

As we've already seen, 4XCP (palmitate bound α-helix LBP) presents at least 2 conformers so there is some flexibility associated with this bound protein but how flexible is it exactly? And how does it compare against its ligand-free form and a β-sheet LBP? 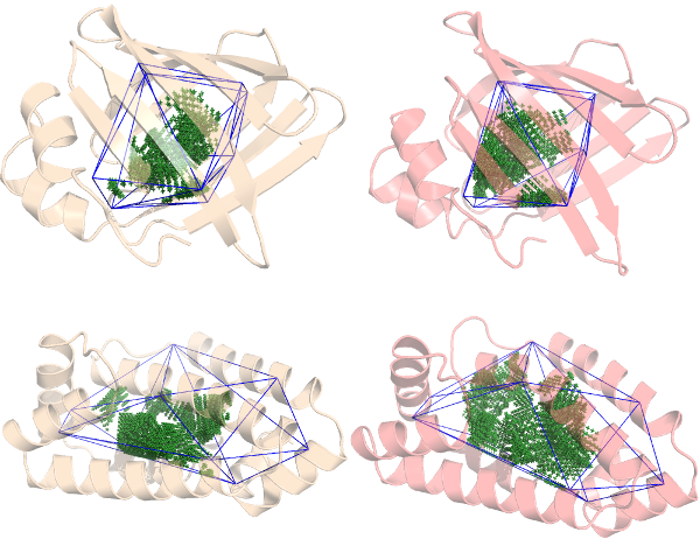 The cavity has already been defined following the steps described in the Quickstart and we also set ANA to High precision (included_area_precision = 1), so let's focus on the flexibility specific options. Flexibility calculations are based on the Non-Delaunay Dynamics method (described here), so all their specific options begin with NDD_. Both configuration files (config_alfa.cfg and config_beta.cfg) have these 3 lines:

NDD_modes_format the amber format, since we have Amber PCA vectors (modes_4uet, modes_4xcp, modes_1ifb and modes_2ifb). These vectors have an x, y and z component for each particle and what "particle" means depends on the coarse grain model. In this case, we have an alpha carbon model, so each residue will be represented by 1 particle, we let ANA know this in the second line. To read more about the NDD_particles_per_residue option check the reference section.

The third line, NDD_step = 3 tells ANA how far do we want to go with the calculation. ANA performs the NDD method in 3 steps:

If we wanted to perform just the first steps, then we would have to specify the terminal option NDD_output, since we will be getting 2 vectors with the displaced volumes (if NDD_step = 1) or the VGV (when NDD_step = 2). Since NDD_step = 3 ANA will just output the flexibility to the console.

We now turn our attention to the step_1.sh script file:

Notice that all PDB names begin with avg_, these are the most representative structures from our trajectories for each system. This is necessary since the PCA vectors we have (modes_...) were calculated in reference to an average structure, so we took the closest frame of our trajectory to that theoretical average. The name of the file with the PCA vectors and their frequencies are specified using the flag -M. We also see a new terminal option -Z or --NDD_size, this is a multiplier that affects how much ANA displaces the cavity along each vector. Different proteins and different cavities may need different magnitudes, but so far a value of 5 has been the most reliable magnitude. If you wish to check the convergence of the calculation, you can rerun the calculations with a --NDD_size (-Z) of, say, 3, 4, 6 and 7.

This is the output we get from step_1.sh:

ANA gave us a parameter representing the rigidity of each protein's cavity; the lower, the more flexible the cavity is. So, while B-sheet LBP becomes more rigid when binding its ligand, the α-helix LBP becomes more flexible. More details about this particular system can be found elsewhere.

Physical meaning of the rigidity result​

Both PCA and NMA assume the protein's movements along the collective coordinates are harmonic. Therefore, the protein's cavity would also change harmonically and its energy change would follow the hamonic potential energy equation:

ANA reports the spring constant ---in units of KJ/mol and in the direction of the VGV---, as a measure of the cavity's rigidity (or flexibility). For a given magnitud of potential energy, the lower this value is, the higher the displacement along the VGV will be. That is, the more flexible the cavity will be.

Based on Normal Mode Analysis​

We now compare the flexibility of the cavities of 2 different proteins, but with similar function. They belong to the dynein family of cytoskeletal motor proteins that move along microtubules. Specifically, these are called dynein light chains and they both interact, through their cavities, with a disordered region of another dynein protein: 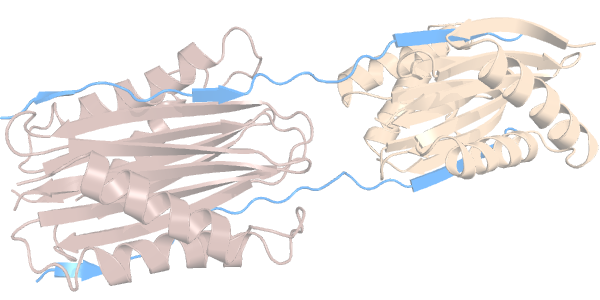 We have two homodimeric dynein light chains: Tctex1 (in dark salmon) and LC8 (in sand color). Each have 2 identical cavities ---which we will call cavities C and D---, through which they interact with a disordered region of another protein (in light blue).

If we check each domain separately, we see where their cavities lie. The LC8 domain: 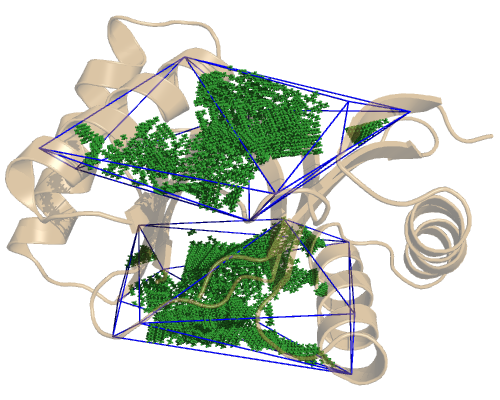 and the TcTex1 domain, which is a bit bigger: 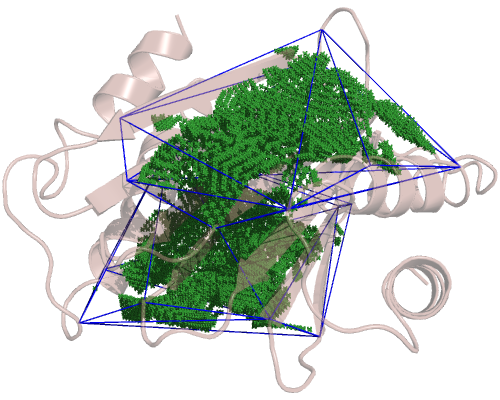 So, since we have 4 cavities, we have 4 configuration files. Only the included_area_residues option changes between them, so we'll focus on the NDD specific options:

The only change with respect to the LBPs configuration files is the input vectors format (NDD_modes_format option), now set to column since these are not Amber PCA vectors, but NMA vectors in a file where each column represents a normal mode.

The execution lines are inside the ./step_1.sh file:

We see a new flag -F, this points ANA to the file with the frequencies. When NDD_modes_format is set to column, ANA will assume this frequencies come in units of 1/s^2.

That is TcTex1's cavities are more flexible than LC8's. Indeed, we were able to capture this higher flexibility in MD runs (not published).