Let's say you have a few structures and you want to characterize the flexibility of their cavities, but you can't run MD or NMA, at least not locally. You can always upload your PDBs at Bahar's server and get the first, say, 20 normal modes and their frequencies and then use ANA to calculate the cavities flexibilities. In this tutorial, we're going to do just that. As always, all the files are available online.

We will be using the same dynein structures we used on the previous tutorial, just to be sure we're not getting the wrong results.

We upload lc8.pdb to the server and run the calculations without changing the defaults, just to be quick.

We get an animation of the first normal model like the one on the next image, and a panel of options.

We go straight to Download files and download from the first 2 links, "Small Eigenvalues" and "Slow eigenvectors". 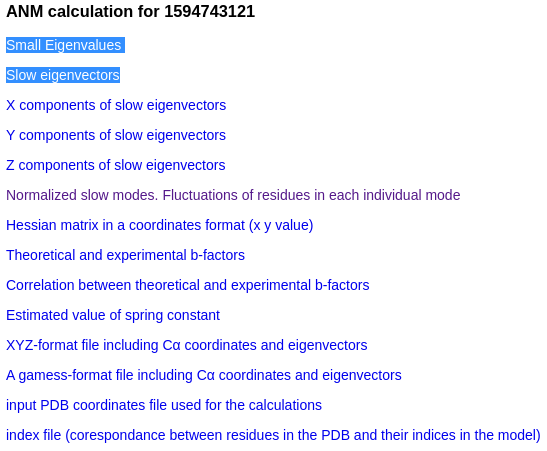 We now have the vectors and the frequencies of both homodimers. Those are the only new files with respect to the previous tutorial. The structures are the same, so the cavities are the same and ANA's configuration files too.

The contents of our running script ./step_1.sh:

And we see the same difference in flexibility we saw before: TcTex1 has more flexible cavities than LC8. But we also notice the rigidities are much lower this time. This is because we only used 20 vectors and 20 frequencies instead of the whole set of collective coordinates (504 for LC8 and 576 for TcTex1), as we did in the previous tutorial. Yet, we still got the same result with the first 20 normal modes.